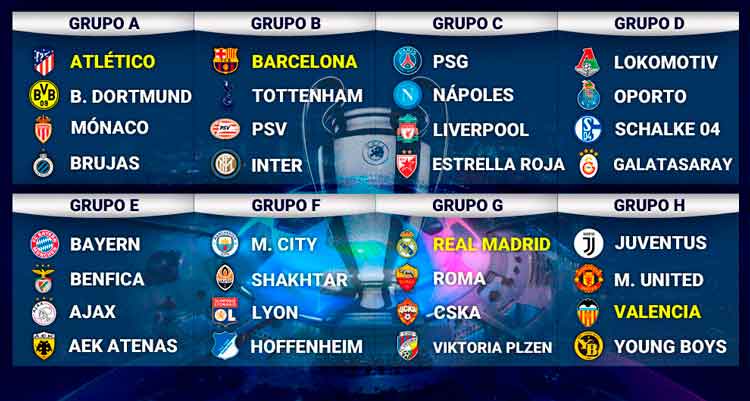 Yesterday was held the draw of the clubs most important international competition, the Champions League. Some Football Impact clients are in affordable groups, meanwhile others will have to struglle very hard to get access to the next round of the competition.

In the group A Borussia Dortmund and Club Brugge KV will play against AS Monaco and Atlético de Madrid. A very hard group.

Inter also joins one of the most difficult groups, with PSV, Barça and Tottenham.

Our friends from Liverpool, the runner-up team, join the group C and will have to play against PSG, Napoli and Red Star.

FC Lokomotiv Moscow and Schalke 04 are part of group D with Oporto and Galatasary, one of the most equal groups.

The German team Hoffenheim and the Ukrainian Shakhtar Donetsk will try to qualify to the next round, although they will have to face to Manchester City and Olympique Lyon.

In the group with Real Madrid and AS Roma, we can find two usual Football Impact clients, CSKA and Viktoria Plzen.

In the group H Young Boys Bern will have to face to Manchester United, Juventus and Valencia CF.

The only group with no Football Impact client is E, with FC Bayern, Benfica, Ajax and AEK Athens.