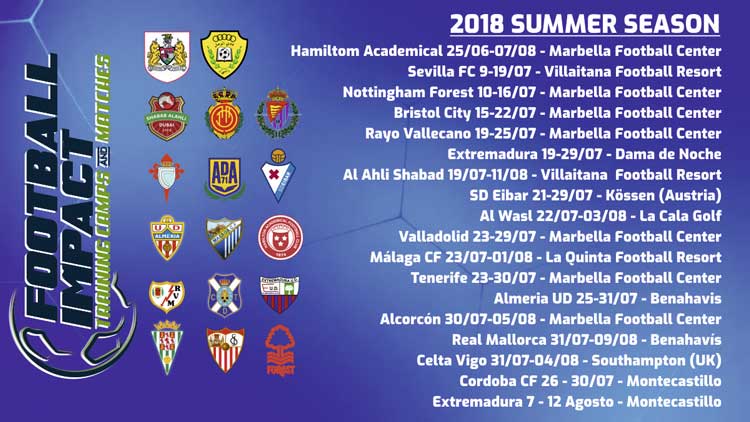 The season 2017/18 already finished, it was a year full of emotions and targets achieved with greater or lesser degree. Now it’s time to think about the new season and as every year around this time, many times choose a high level stage.

Marbella Football Center and Football Impact are busier every year, this summer there are a total of sixteen teams that will work with these two companies.

Teams from first and second division from England, Spain, Scotland or Dubai join the the long list of the teams that will work with Marbella Football Center and Football Impact this summer. This is the list:

Sevilla FC,  which is actually working at Villaitana Football Center from last July 9th and will stay until next 19th.

Nottingham Forest FC, the English team perfromed its one week summer stage in MFC from July 10th to 16th.

Bristol City FC, the team from Championship arrived to Costa del sol on July 15th, where it will stay for one week

Rayo Vallecano, the team from Madrid returns to Sapnish football top division and for this it will perform a summer stage between July 19th and 25th at MFC.

Extremadura UD has also chosen Football Impact and will work out at Dama de Noche (Marbella) between July 19th and 29th in a first visit. In August the team will repeat, between 7th and 12th.

Montecastillo will also be visited by Real Córdoba CF, between August 7th and 12th.

The team from Dubai Shabab Al-Ahli Dubai FC will be one of the teams that will stay longer. It will arrive on July 19th to Benidorm and it will train there until August 11th, at Villaitana Football Center.

SD Eibar decided to travel  to Kössen (Austria) between July 21st and 29th, all organized by Football Impact.

Al Wasl FC is another team from Dubai that chosed Football Impact. It will stay at La Cala Golf between July 22nd and August 3rd.

Real Valladolid CF, the Spanish team will train in MFC on late July, between 23rd and 29gh.

Málaga CF will perform its stage from July 23rd to August 1st at La Quinta Football Fields, all organized by Football Impact.

CD Tenerife SAD will work for one week at Marbella Football center, from July 23rd to 30th.

UD Almeria has chosen Benahavís for its summer stage with Football Impact. They will stay from July 25th to 31st.

AD Alcorcón will work between July 30th and August 5th at MFC.

RCD Mallorca will arrive on July’s lastday to train in MFC until August 9th.

RC Celta de Vigo will travel with Football impact to Southapton (England), where it will stay from July 31st to August 4th.